The JetBrains Kover Gradle plugin is a minimal-fuss code coverage solution for your JVM project. In many cases, it may even just work out of the box.

Simply apply the plugin, and a new koverReport task will be available. When run, it generates an HTML coverage report that you can open and browse.

However, while useful, it probably won't be long before you want to convert this:

into a badge that you can add into your GitHub README:

Accomplishing this is what we'll cover in this post.

Before we jump in, let's take a bird's eye view of what we're going to do:

This post does not go into detail about the following topics, so you may need to refer to their official docs if I rushed over something you didn't fully understand:

Normally, people use gists as a way to share code snippets with one another, but fundamentally, a gist is simply a text file that GitHub hosts for you.

Start by going to https://gist.github.com/.

We're going to create a dummy JSON file. Don't worry about its contents as it will be overwritten by a later step. GitHub won't let it be empty, though, so just type in some random text to start.

You can name the file anything you want (and if you change your mind, it's easy to rename later). The real goal is to get the unique ID value that GitHub generates for your gist. I might recommend <yourproject>-coverage-badge.json (with <yourproject> substituted with your actual project name).

You will be sent to a new page. Check the URL of that page to get the gist's ID:

You won't need this ID for quite a few steps, but it's good to know where to find it.

We want to allow a script to modify the recently created gist on our behalf. To accomplish this, we need to create a token that can be used to authorize edit access to our gists.

To start, log into GitHub and select your Settings page: 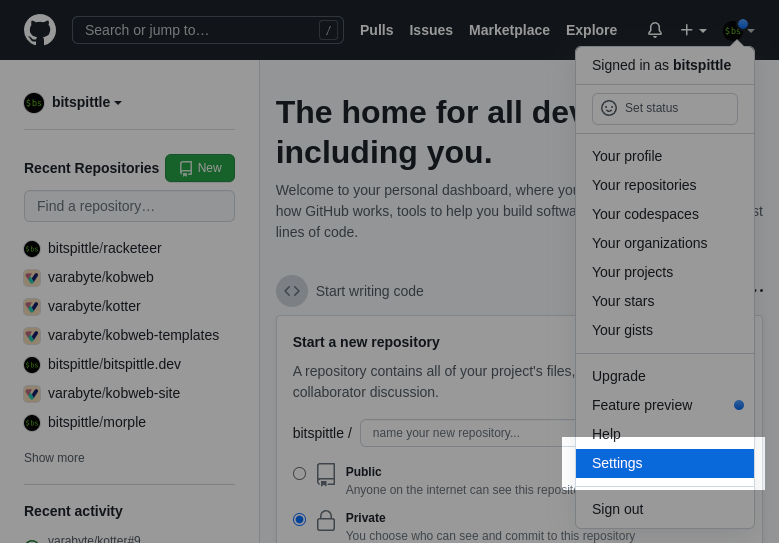 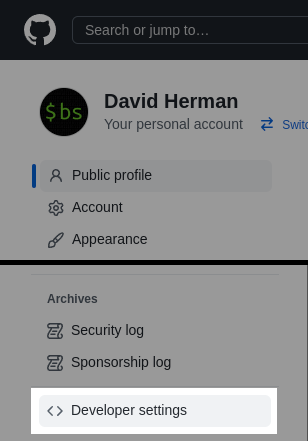 We'll create a token that can only access gists (limiting the potential damage if it ever leaks).

Create any description you want for it. I chose "Coverage badge gist editor" so I could remember later why I created it.

Next, I set my token to never expire. Hey, I'm just a simple guy who is developing hobby open source projects, so I'm not too worried about my gist token getting stolen, sold on the black market, and abused or whatever.

However, best practices require I mention that tokens should expire, and then you should recreate a new one and update all affected workflows when it does. I'll leave that final decision up to you. If you're on the fence, just create a non-expiring token for now. You can always delete it later.

Select only the gist permission, and then click on the Generate token button. 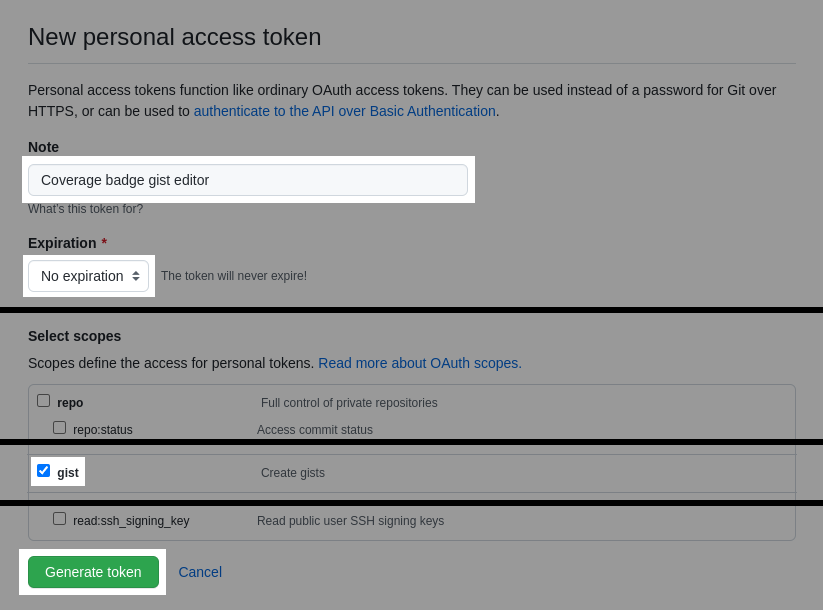 Press the "copy" icon to copy the token ID that was just generated.

This copy step is very important, because if you leave the page before you do so, the ID is lost forever. If that happens, you'll have to delete the token and redo this section.

Now that we have our token ID copied into our clipboard, we want to put it somewhere where GitHub will be able to access it without us checking it in as plaintext somewhere. This is accomplished with GitHub secrets.

Secrets are easy to add! Visit the project you want to add the badge to, and open up its Settings page:

Click on Secrets > Actions, then on the New repository secret button: 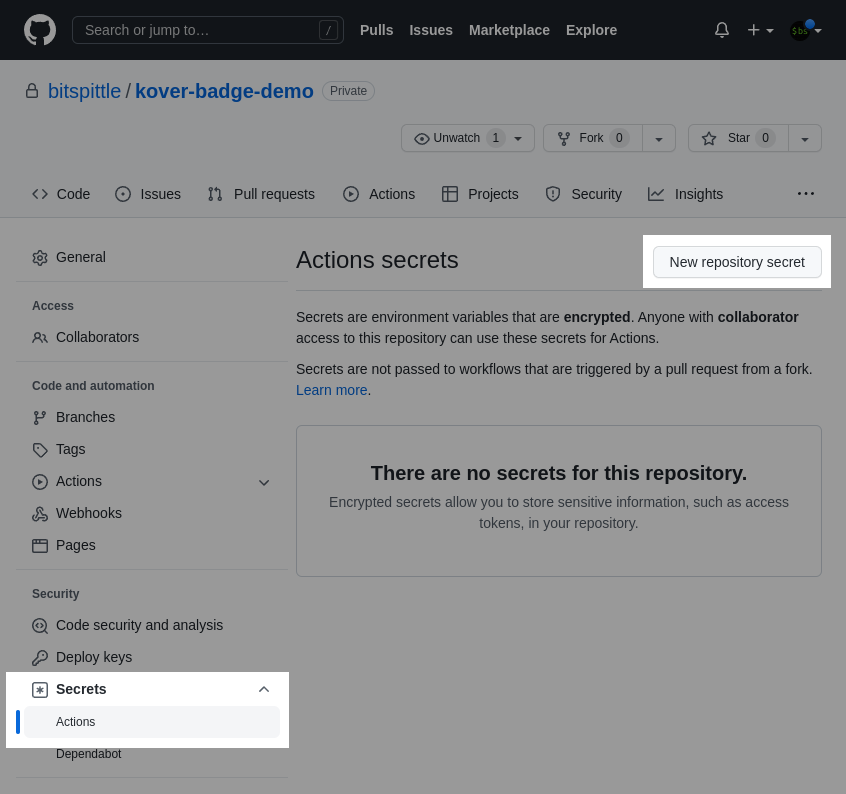 Pick a name for your secret. We'll reference it later, so remember it! I used GIST_SECRET.

Paste the token ID from your clipboard into the Secret textbox: 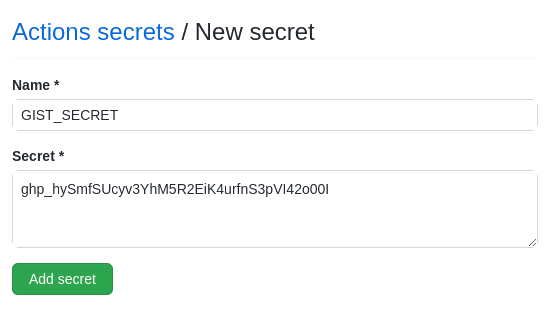 That's it for now. Let's move our attention to Gradle next.

At the beginning of this post, I mentioned that koverReport generates an HTML report. This is true, but it also generates an XML report. In fact, there are koverHtmlReport and koverXmlReport tasks you can run directly.

The Java standard library (which Gradle provides access to) already has access to an XML parser, so what we'll do here is create a simple task that depends on the koverXmlReport task, loads the XML file it generates, parses it, calculates the coverage percentage that we want, and prints it to the console.

A Kover XML report looks something like this, with the coverage values we're interested in stored in children elements of the root report tag:

In most cases, when people think of coverage, they are probably thinking of line coverage. You can read more about the different types of coverage counters if you'd like, but we're just going to pull out the report's "LINE" data in this tutorial.

In a Gradle build script (one which is using the Kover plugin), paste the following task registration somewhere in there:

You can read more about Java's DocumentBuilder class if you'd like. But above, we are parsing the XML report generated by Kover, looping through all children of the root ("report") element until we hit one whose name is "counter" and has the "LINE" type attribute. The code is fairly straightforward.

To run a Gradle task where it hides its own logs so only your output is shown, pass in the -q (or --quiet) command line argument.

In other words, in a terminal, you can run:

Confirm that this is working for you before moving onto the next step.

GitHub Actions is GitHub's approach to automating work, which is commonly used for continuous integration. A workflow is a script which defines one or more related jobs that run together in response to some event.

We'll create a workflow which updates our badge data every time new code is pushed onto the main branch.

In your project's .github/workflows folder (which you can create if it doesn't exist), create a YAML file (I called mine coverage-badge.yml):

In my project, the main branch is called main, but make sure that this is true for your project as well. Legacy projects may use master, for example.

After that, the first steps of the script tell GitHub to fetch the latest code and make sure Java 11 is available. You may need to use a higher JDK version in your own project, in case you're using any JDK 12+ features or standard library APIs.

Otherwise, just copy these statements as is.

The next step runs our custom Gradle task (printLineCoverage), saving its output into a variable (COVERAGE) that gets put into an environment that can be accessed by the rest of the script.

Setting environment variables in workflows is a pretty handy trick in general. You can read more about this in the official docs.

Note: You may need to specify the Gradle task more explicitly, e.g. :myproject:printLineCoverage, in case there are any ambiguities in your own project, such as multiple submodules using Kover.

The final workflow step configures the Dynamic Badges action, which is the action that will overwrite the gist we created earlier.

While you can specify the color of your badge yourself, the Dynamic Badges action supports a convenient feature where, if you set a numeric value plus a range, it will auto set the color for you.

If your value is at the minimum end, the badge will be red, and if at the max end, it will be green. Anywhere in the middle is interpolated on a gradient, so that e.g. 50% will be yellow.

Note: Dynamic badges can be configured in other ways as well. See the official docs for full details.

When your workflow is done, check it in and submit it. Go to your project's Actions tab and make sure that you see your workflow running, and that it eventually succeeds.

Once you get a green checkbox, check your gist. It should be updated with real values now!

Putting the badge in your README

At this point, we're nearly done. To create a badge whose values are read from a JSON file, you can use the shields.io endpoint API with the following snippet:

where you replace xxxxxxx with your username (e.g. bitspittle), yyyyyyy... with your public gistID (e.g. d6b5fcf2e961f94780a3dbbc11be023c), and the filename with your gist's final file name.

Add that snippet to the top of your README, commit it, and push it into GitHub.

Finally, visit your project, and take a moment to admire your new, shiny badge -- that was a lot of work!

You can see where I created a coverage badge in my Kotter project (check the top of the README). 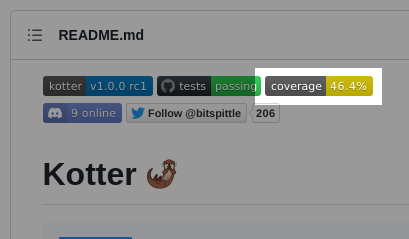 You may want to reference my...

On the shoulders of giants

In addition to the official docs, I found the following sources particularly helpful:

Honestly, this process was more involved than I would have expected. But having a coverage badge on your project's README page is totally worth it.

And finally, you don't have to stop here! By combining Gradle tasks, Dynamic Badges, and GitHub Actions workflows, you can definitely create some amazing custom badges.